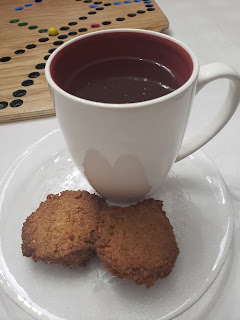 Mix Everything through the salt with a fork into a thick, doughy batter. Stir in the ginger and chamomile bits.

Note for chamomile – pour dried chamomile into a strainer and sift to get the tiny bits. To get the most you can, use fingers to lightly grate against the strainer. Put the larger bits back into a container for tea later.

For the honey, I actually used a turmeric and cinnamon infused honey and omitted the extra cinnamon. I also used unsweetened coconut to cut down on some sugar. You can use which ever you prefer.

Spoon onto baking tray, or roll into a ball and flatten. Bake at 300 degrees for 25 minutes, until a nice golden color. The coconut tends to burn so watch closely after 20 minutes.

Low-carb, gluten and dairy free, and good for you!

Support the Podcast - Buy Me a Cup of Tea